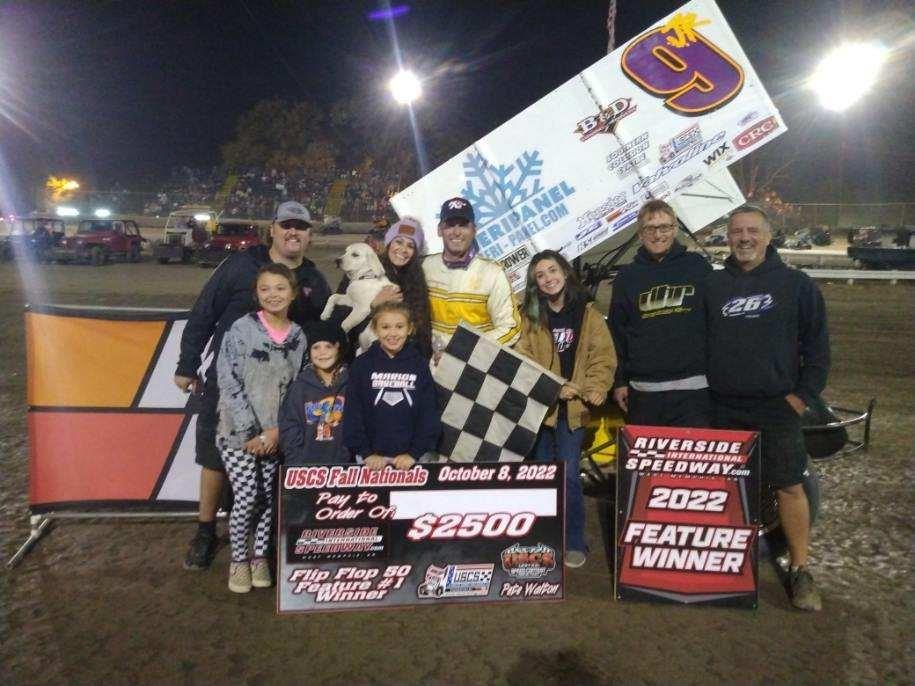 Hagar is the winningest driver during the USCS Series event, which runs a 25-lap feature and then inverts the feature winner for the second 25-lap main event.

“I don’t know what it is about that event, but it seems to play toward our favor,” he said. “We made some good passes in the heat race Friday to set ourselves up fourth in points. We started fourth in the scramble and won it, which put us on the pole for the first feature on Saturday.”

Hagar advanced from fifth to second place in a heat race and from fourth to win the dash on Friday. That put him on the point for Saturday’s first feature.

“We led the whole thing and lapped up to seventh I believe,” he said. “Cody Gardner showed me his nose early in the race. After that I was able to move down and find a good groove to run. I was running the middle in turns three and four and the top of turns one and two. We had a good car. I didn’t have enough gear to run the bottom of turns one and two so I had to let it eat around the top to keep the speed up, but the race car was really nice.”

Hagar led the distance for his sixth career win during the first feature – he also has one victory during the second feature in the history of the event. That forced Hagar to line up on the outside of the 12th row in the final feature.

“It started off slow trying to get around cars without crashing,” he said. “About five laps in the track started taking hints of rubber. Everybody was cheating the rubber. I went right through it and driving by people until it got heavy, heavy rubber. I was up to sixth with about 10 laps to go when that happened. We didn’t have a caution and by the end of the race I was on the same straightaway as the leader. We did the best we could given the circumstances.”

Hagar rallied from 24th to sixth, earning the Hard Charger Award for passing the most cars. It marked his 30th top 10 of the season.

Hagar plans to take the next two weeks off before ending the season on Oct. 29 at Riverside International Speedway.

Since 2002, B & D Towing and Recovery, which is located in Marion, Ark., has been the exclusive source for professional towing, recover and transport by major Memphis truck dealerships, parcel delivery companies, nationwide trucking firms and more. For more information, visit http://www.BnDTowing.com.

“B& D Towing supports racing,” Hagar said. “They can help anyone in the Memphis area. For anyone who needs a hand, B&D is recommended to save the day.”