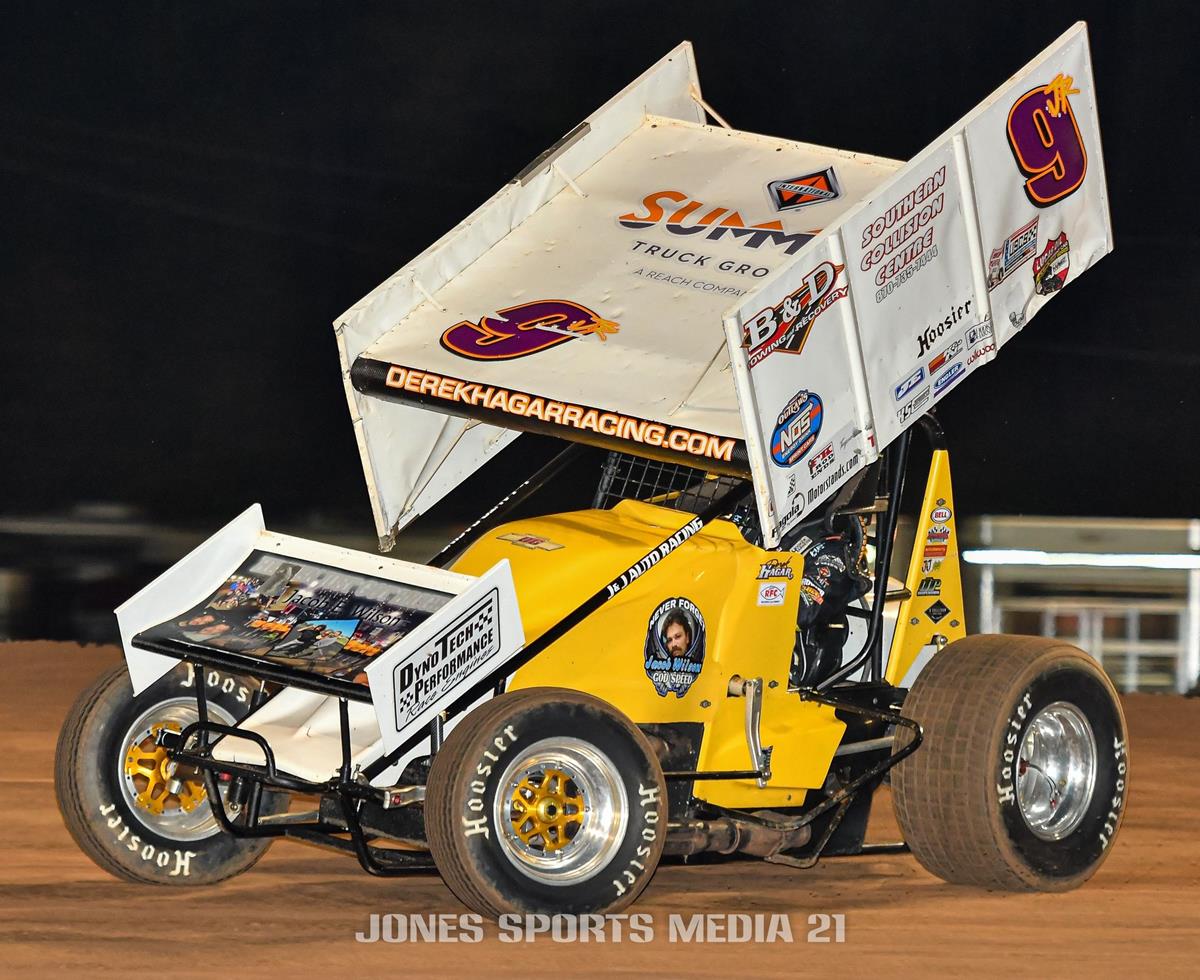 Hagar kicked off the Lucas Oil ASCS National Tour action on Friday when he timed in second quickest in his group. A run from third to win a heat race advanced Hagar into the feature redraw.

“It was a different format that was fun,” he said. “The group qualifying didn’t waste any time for the show and put a new twist on things. You didn’t have a bad pill draw ruining your night. You could still qualify, get in the heat race inversion and get some good points to lead you into the feature. We were lucky enough to qualify second in our group. We won our heat race and drew the No. 3 for the feature. Nobody drew the No. 2 so that put me starting second in the feature.”

Hagar stayed within striking distance of the leader throughout the first half of the 20-lap race before pouncing in traffic. He took the lead on Lap 12 and held the point for a trio of laps before Jordon Mallett regained the top spot. Hagar settled for second place, which earned a lock-in position into Saturday’s dash.

“We had a heck of a race with Jordon,” he said. “I got by him just after halfway as he was being patient with lapped cars. I was able to move around him in the middle where they were throwing the moisture up. It worked out, but then I tried to get around a lapped car a couple of laps later and Jordon was able to get under me. I got back by him with a couple of laps to go and we had a lapped car spin in front of both of us. I went high and Jordon was low, which allowed him to beat me off the corner.

“It was awesome to see Jordon and his family get their first ASCS National Tour win. That’s something they’ll never forget, especially on that big of a stage like the Short Track Nationals.”

The revenge dash format on Saturday yielded the back row for Hagar, who finished fifth after being handed the No. 5 to line up fifth. That gave him the fifth starting position in the 41-lap main event.

“Once we came in from the dash we changed the gear and some setup stuff for the feature,” he said. “The race was around the bottom, follow the leader until the track blew off. It really didn’t get racy until five or six laps to go. I got up to fourth and was trying to go around (Sam) Hafertepe Jr. In hindsight I should have followed him and tried to get under him instead of going around him, which let (J.J.) Hickle get by me. We had a fourth-place car and at one point we were all there under a blanket as (Blake) Hahn and Jordon were battling for the lead. It wasn’t the finish we wanted, but you can’t hang your head running in the top five at the Short Track Nationals.”

The fifth-place result marked his second straight season with a top five during the Short Track Nationals finale and third in a row with a top 10.

From the wilds of Baja, Mexico, to the “Good Ole Boys” of NASCAR, from mowers to fitness equipment, FK Rod Ends is there with an evolving program designed to supply rod end products to users everywhere. For more information, visit http://www.FKRodEnds.com.

"Maria and the crew at FK Rod Ends are awesome to work with,” Hagar said. “They take pride in their products and that's why we choose to run FK Rod Ends."