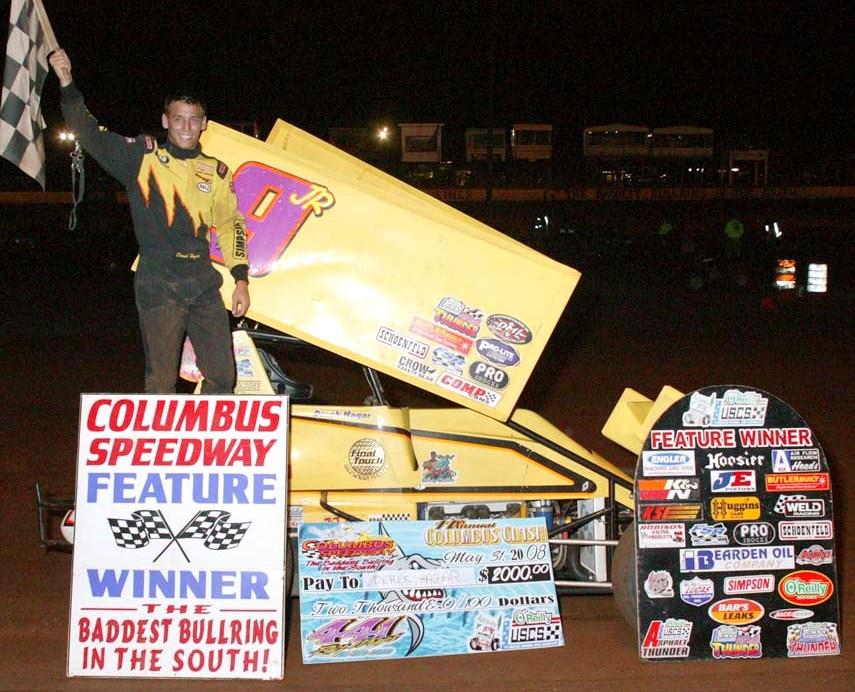 May 31, 2008 Columbus, MS – 2006 O’Reilly United Sprint Car Series Rookie of the year, Derek Hagar from Marion, Arkansas recovered from a bad night at North Alabama Speedway on Friday to scorch the competition in the 30-lap O’Reilly United Sprint Car Series Speedweek 2008 Finale presented by Lucas Oil at Columbus Speedway. The talented seventeen year-old led every lap of main event while racing high on the race track with his right rear tire against the wall most of the distance around the historic 3/10 mile red clay oval known as the “Baddest Bullring in the South”. It was the talented young gun’s third O’Reilly USCS feature win over the past year.

On Friday night at North Alabama Speedway, while under caution Hagar suffered minor burn injuries when his #9jr mount caught fire after the fuel cap came off and he was splashed with Methanol. But, on this night Hagar burned up the Columbus, Mississippi speed plant while racing dangerously close to the wall around Johnny Stokes well groomed racing surface. Hagar event hit the wall hard exiting turn four on lap fifteen, almost allowing defending O’Reilly USCS National Champion Terry Gray from Bartlett, Tennessee who was running in the second position at the time to pass him. But, the fearless young gun

Another talented young gun, Danny Martin, Jr. from Sarasota, Florida raced across the finish line in the runner-up spot for his best finish of the Speedweek mini-series. Past O’Reilly USCS Champion, Marshall Skinner from West Memphis, Arkansas followed in the third position after starting 12th. Round One (Riverside 5/24) winner Lee Sowell from Nesbit, Mississippi continued the Young Guns assault on the veterans with a fourth place finish and 20 year-old Don Young from Bartlett, Tennessee rounded out the top five.

Two-time O’Reilly USCS Champion, Kenny Adams from Malabar, Florida went to the work area on lap 12 for a tire and returned to the track at the rear of the field to charge back to sixth place. Three-time Speedweek 2008 feature winner, Tim Crawley joined Adams at the rear of the field on lap 12. Crawley was relegated to the rear after his motor died under caution requiring a second push off. He followed Adams across the finish line in seventh place. Rookie driver Justin Carver from Memphis, Tennessee, who has looked impressive all week, finished in the eighth position. Local favorite, Buster Dickerson from Caledonia, Mississippi finished ninth in his first O’Reilly USCS start off the season and O’Reilly USCS Mid South Rookie point’s leader, Anthony Nicholson clinched the Speedweek 2008 “Rookie of the Week” honors after rounding out the top ten and finishing eighth in the standings among the 40 plus drivers that competed.

The race had three caution flags. On the first one on lap twelve while circling the track under caution the motor died on Tim Crawley’s #88 mount. Crawley, who had been running in second place at the time, had to re-start from the rear and rallied back to seventh position to secure a tie for the Speedweek 2008 Championship. A final caution came out when Speedweek 2008 points leader, Terry Gray slowed in turn one when the Winters aluminum u-joint in his car exploded and ripped the every component from the engine plate. Fortunately, Gray was not seriously harmed.

Three time O’Reilly Speedweek 2008 feature winner, Tim Crawley from Benton, Arkansas and 1999 O’Reilly USCS Champion, Marshall Skinner from West Memphis, Arkansas who finished all six A-Main events with no finish worst than seventh position tied in the final tabulation for the Speedweek title and we’re declared Co-Champions. The 2007 O’Reilly USCS Speedweek Champion, Terry Gray had the points lead slip from his grasp when the Winters U-Joint in his #10 mount let go while in the runner-up position with 3-laps to go and settled for third in the standings.

Lee Sowell who grabbed the win in the opening round at Riverside Speedway on May 24th finished fourth in the mini-series standings and Raymond Stull from Independence, Mississippi rounded out the top five in the Speedweek points. Young Guns Danny Martin, Jr. from Sarasota, Florida and 2007 O’Reilly USCS Rookie of the Year, Don Young from Bartlett, Tennessee tied for the sixth position. 2008 Rookie point’s leader, Anthony Nicholson also from Bartlett, Tennessee finished eighth in the standings after a series of strong performances in a talented field. Veteran USCS regular Ronny Howard from Southaven, Mississippi followed in ninth place in the standings. The O’Reilly USCS Speedweek finale winner Derek Hagar from Marion, Arkansas clinched the final pay-off position in the standings for the busy and competitive week of racing action.